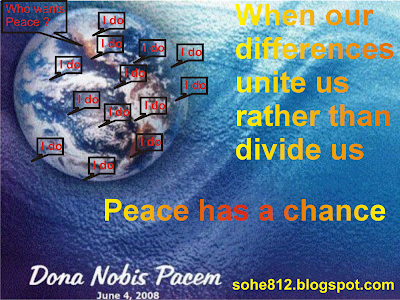 There are so many of us out there who would like to see the world live in peace with one another. Each and every nation has citizens that crave an existence where they can walk the streets with their head held high, not fearing who or what may me lurking around the next corner.

But what about those countries that seem hell bent on hatred and the ever present threat of violence emanating from every nook and cranny of their being?

That my friends is a perception and not a reality. True there are a great many who would like nothing more than to carry on these plans of oppression and venomous disregard for the rest of society, but don't think for a moment that everyone under their regime holds those same feelings.

Fear and intimidation has a very powerful way of squashing our hopes and ambitions. The human heart however, has a tremendous resilience to these actions and the people behind them. The very ones that seek to keep us in the shadows are ultimately powerless to win over our hearts and souls as long as we keep that flame burning deep within us.

We often speak of how we can change a community, a nation, or even the world. We think of these as noble goals for the good of mankind. Perhaps they are, but the word "we" must be changed to the word "I" if any real change is to happen.

When I try to change those around me it only serves to frustrate me and bring more illumination to the fact that I am the one in need of change first and foremost.

When I get irritated at the waitress because she didn't bring me the change broken out into the proper denominations for her tip, then it's not up to her to change, but my heart attitude toward her.

When the guy cuts me off on the freeway, I shouldn't want to retaliate and "one-up him". I should take a deep breath and know that I'll still make it to my destination.

Now obviously saying these things is one thing, putting them into practice is quite another. This is just the human condition. We tend to want what "we" want. We want to get to work on time, and we want to have an uneventful drive too. Problem is, the other guy has his own agenda and it very likely does not coincide with ours. Now what? Do I hit the throttle and try to accomplish my goal, or do I acquiesce and allow his priorities to override my own?

This may be an oversimplified view of peace, but isn't that where it all starts? On the simplest of levels. Small steps of care and consideration for our fellow man, leading to bigger and bolder actions of a global scale.


This Blog Blast for Peace has been the vision of Mimi of mimiwrites. You will likely see several posts today carrying this theme, Dona Nobis Pacem, I hope you will take the time to read them and explore the possibilities.
Posted by Jeff B on Wednesday, June 04, 2008

Wishing you, me, all of us, peace.

Quite a thought provoking post Jeff. I am in complete aggreement, to make a change it all comes down to I/me. Thank you for sharing this with me/I.

Have a day filled with peace my friend.

Excellent, absolutely excellent. Peace to you and yours. :)

you wrote this to remind me didn't you?

peace to you and yours

A well written post Jeff. And oh so true. Thank You for writing it.

Peace to you and yours today my friend.

Songbird- I just used basically the same words as you did in another comment.

I'm hearing the twilight music in the background.

Skittles- Thanks for coming by.

Sandee- It's been so much fun seeing what everyone is posting today.

Katherine- If it jogged an emotion or thought that you needed to hear, then that's exactly why I wrote it.

Truthfully, there was a lot of self conviction as I penned the words.

I remember a saying from long ago. Goes something like this:

"Be careful when you point your finger at someone else, because when you do there are three more pointing right back at yourself."

Kimmie- Just glad to be a part of it.

We all should start with ourselves first - find our inner peace...
Have a peaceful day and let love rule! :o)

Great post and globe, Jeff. We, begins with I -so, if everyone does "let it begin with me" we've at least got a shot at changing each of us, one person, one blogger, one post at a time perhaps.
Peace be with you and yours!

Beautiful wise essay - and I don't think it is oversimplified. I love your peace globe too. Peace. Awesome good job.

Great post, Jeff! Yes each of us has to change and then the whole world will change! :D

I couldn't have said it better myself (well apart from divide,LOL)

Seriously though, you make a very good point. If each one of us becomes more peaceful then there will be more peace in the world.

Fabulous post Jeff. Peace to you and yours my friend. :)

Ivanhoe- Thanks for the words and the visit. Hope you're having a "Blast" today.

Odat- Thanks. I enjoyed yours as well.

Jeni- One by one, I becomes we. Peace to you.

Teach- Sometimes looking in a mirror is the best way to view the world around us.

Cathy- It doesn't always feel natural, but I think it's necessary.

Akelamalu- It certainly has been a great day thus far.

Great to see you on board and what a nice Globe!
Mine is up too :-)
Hello from Norway - peace to you and yours!

A wise post, Jeff. If we don't carry peace in our hearts, our words don't mean that much. What is it about the highway that sucks us into the warrior mode? I've been there. That's where our "inner peace" is really tested.

Very well said Sir. I've been trying not to swear at traffic. So far I've been unsuccessful in the attempt, but I'm still trying.

Peace in baby steps I say.

And peace to you and yours on this Blog Blast day!

RennyBA- How cool is that. A visitor from Norway. It's so fun to see how this has circled the world.

San- It's easy to shout peace from the comfort of our living rooms, it's quite another to actually live it out.

Travis- Right there with you my friend. One zipped lip at a time!

Buffalo- Dreams are merely actionless thoughts. I know it's difficult to be an idealist in today's society, but even if we only affect one person in a positive manner, I believe it's worth it.

Absolutely wonderful Jeff...Your words are insightful and should be read by all

PEOPLE GOT TO BE FREE

Have I ever mentioned that "Let there be peace on earth" is one of my favoritests tunes to hum?

I was just reading an article in AARP, (yeah! I'm THAT old) about parents having to care for their severely injured children who have survived the war in Iraq and have come home damaged. The overwhelming implications of what both parents and children have gone and are going through is heart breaking.

And, pray that more people can look into their hearts, souls and minds to be able to take those steps to make the world a better place.

Very nice Jeff! Peace to you my friend!!

First of all Jeff...I love your Peace Globe!!!

It's so freaking AWESOME!

And secondly...the words that you share, sum up PEACE perfectly. It's a powerful reminder that it all starts with SELF.

And something that can never be remembered enough.

Thank you for reminding me, buddy!

Bond- Hopefully they don't just stay as words on a screen. (myself included)

Mel- I saw that one. Don't delete it. Just a reminder that as long as we're on this earth it'll continue to be a challenge. I retaught myself a valuable lesson as I let the words of this post unfold.

Nitebyrd- No war whether it can be justified or not ever goes without its scars. Iraq certainly is no exception.

Roger- May I find it and give it away again. Thanks.

Ron- "Can never be remembered enough" is so true. As the wave inevitably subsides I will need this nudge again.

I think traffic is a great place for us all to start practicing peace in our every day lives. It feels sometimes like all the drama of life plays out on the highway.

beautifully said!!!! Peace must begin from within first.....amen...

fingers movin a lil too fast

Marilyn- Does it ever. From the comfort of our own personel phone booth, make-up mirror, dining room, office on wheels...we seem to be so occupied at times that even the slightest inconvience from outside our "space" throws us into a fit.

Sista- Like a drop of water in a pond. One small starting point that ripples out.

I do think most people want peace...but they don't realize how they need to give in order to get.

This is a very thought-provoking post and enjoyable to read. It is so easy for anyone to put the world to rights but only a few have the ability to follow their thoughts through. I offer you peace and love.

I was writing a bit of poetry along those lines just the other day. Shall publish that sometime soon.

This is a beautiful post. Thanks for sharing your nice thoughts.:)

Jigsaw- Its something I have to remind myself daily of to try to keep on track.

Indica- A simple concept that can be monumentally challenging for many.

The challenge IS the "I" first and then the "we"....but I don't think this is oversimplifying at all. Very nice post, Jeff. You hit on many things that I hope people take the time to read and digest.
Brava!

Peace to you and yours,
Mimi

Wise words. Peace to you and yours.

Visitors from around the world

A little of this and a whole lot of that.

I'm not solving the world's problems here, so don't get your shorts in a bunch. I'm also quite sure not everything posted here will appeal to every person. That said, if you disagree with what I say or publish, fine. Voice your opinion. Just keep a civil tongue please.